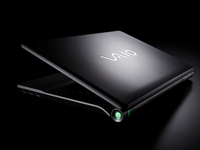 Sony has decided to add the Xross Media Bar (XM that has proved so successful in its PlayStation 3 to its new range of Vaio laptops.

The Vaio FW series features Vaio Media+ software, which uses the 'move along, scroll up and down' functionality seen in both the PS3 and the PSP.

Sony clearly believes bringing this kind of synergy to its devices will help create the 'digital living room' all the major brands are gunning for.

The Vaio FW series also allows connection or creation of a DNLA server, which the PS3 or PSP can connect to.

Sony will also bring the same system to future Bravia TVs as it aims to add more functionality to the goggle box too.