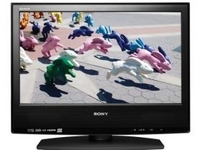 While the other three models only use the original Bravia Engine, they're still HD Ready, and all models have integrated digital TV tuners as standard, and offer a high dynamic contrast ratio of up to 33,000:1.

Stylistically, the TVs follow Sony's "draw the LINE" concept which, means a "piano black finish, with clean, understated lines complemented by gently-rounded curves,"according to the manufacturers..

If all that's not enough, Sony are keen to point out that the S4000 series features an integrated stand which allows for "instant screen-angle adjustment".

Which probably means, in layman's terms, that it swivels.

No price for any of the models has been revealed as yet.