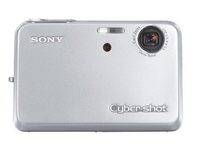 Sony's TransferJet may not be the fastest wireless technology vying to reduce the number of cables connecting our gadgets together, but it now has a better-than-even chance of success after the company announced it has persuaded some of the industry's biggest names to work with it.

The new TransferJet Consortium is made up of 14 companies, including Sony, Kodak, Olympus, Canon, Toshiba, Panasonic and Sony Ericsson, and aims to finalise specifications for the technology to make sure all such devices can connect to each other.

As for what it actually does, the TransferJet take is slightly different from that of Bluetooth or Wireless USB in that it focuses on very short-range connections of 3cm or less.

At that distance, Sony says the 375Mbit/s connection is likely to be safer than longer-range alternatives, as there's little or no scope for intercepting it.

Likely scenarios will have TransferJet-equipped devices such as digital cameras or mobile phones copying photographs and video to computers in just a few seconds without the need for cables or card readers.

Sony Japan says it's likely to be the first manufacturer to introduce TransferJet devices, with a debut likely some time next year.