The best of the rest - weekend roundup 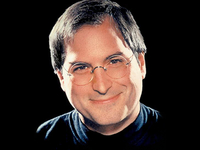 Just when we thought the flat-panel TV market could only go up, we get the news that LG - the second largest maker of LCDs - is actually cutting production because of a slump in demand.

The Korean firm joins AU Optronics in reducing the number of screens it produces by around 10 per cent. The firms are reacting to a saturated market that has seen sales peak as cutthroat competition drives prices down.

Nevertheless, market leader Samsung says it has no plans to follow suit, as it has plenty of orders for the LCD panels it supplies to make other companies' television sets.

Although his iconic technology business/lifestyle brand is in the pink, Apple CEO Steve Jobs can't shake rumours about his health that are making investors more than a little uneasy.

After successful cancer surgery in 2004 Jobs had been the picture of health, but an apparent weight loss noticed by many at the recent iPhone launch has prompted concern.

Such is the importance of Jobs to the firm he founded in 1976, he went off the record to talk to a US journalist in private about his condition. The upshot, we're told, is that he has no recurrence of cancer and is doing just fine.

Although it isn't a real product yet, the mock-up webcam we've just seen from Bristol firm Flynn Product Design would sit nicely alongside any of Apple's stylish products.

The free-standing Bluetooth camera was created by FPD for Philips and is supposed to resemble a spider, albeit one with only three legs. Should it ever go on sale, we recommend arachnophobes steer well clear.

Taking cash out of equation

Finally, this weekend brought news of a cutting-edge banking system from an unlikely source in the Maldives. The m-banking network established there by the country's banks allows users to pay virtual money into banks or to withdraw it by mobile phone.

It comes as a solution to the lack of bank branches across the Indian Ocean island chain. In the 2004 tsunami many people lost their savings that had simply been hidden under a bed or in a box when the flooding struck.