The PSP phone: the story so far 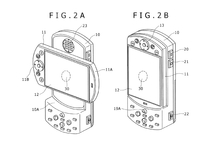 There have been a few rumoured devices over the years that have got the minds and mouths of the technology community working overtime: the iPhone and the Wii are two such examples.

The Sony PlayStation Portable was introduced to similar fanfare in December 2004, and although its popularity has been average worldwide, that hasn't stopped legions of fans looking for the day the PSP phone finally lands on the shelves.

So what's been said so far, what patents have been filed, what concept art has been produced and above all, how much of it is tosh and gubbins?

The first movement that really kicked off the PSP phone rumours was the filing of a patent, back in June 2007.

It featured a rotating screen with a set of keys not dissimilar to those found on the PSP itself, for 'sophisticated mobile game-playing'.

Then, two weeks later, Sony Ericsson spokesperson Merran Wrigley did not rule out the possibility of a PSP equipped phone device. "We're continually evaluating other propositions but they have to be credible propositions," she said.

However, Sony Ericsson stated it was "not interested in sticking parts on phones that destroy the brand equity that's been built up by Sony ."

So far, so confusing, right?

"Up until today we haven't felt we could launch a PlayStation phone because it wouldn't be recognised as a true continuation of that brand of products", he said.

"To explain our position I need to look at the brands we've developed so far, in particular the Cyber-shot and Walkman phones. When we looked at all the assets we could muster for music and imaging, the services, downloads and overall proposition, we felt that we could create something that really lived up to the values of the brand and fill all the required boxes.

"We're not launching a brand of handset simply because we can, but because we can lead [sic] up to the expectations of the consumer."

"It's an area of possible future activity," Maurice Flint, the then outgoing president of Sony Ericsson, also told the Financial Times.

"We need to make sure that it is a credible phone, and be sure we are justified in putting that identity on it."

Well, after reading that a year ago, where the devil is it now?

But then gaming website SPOnG manages to speak to a mysterious 'Sony representative,' who told the world: "We do have talks with other arms of the Sony family about various topics but I can confirm we are not currently working together on the creation of a PlayStation Phone."

It didn't seem to stop the veritable slew of mock-ups, concept art and insane ideas flooding the internet though.

Most seemed to centre on the idea of, basically, a PSP with a slide out keyboard, which was picked up by Engadget from a Spanish magazine clearly hoping to sell more copies rather than uncovering the PSP phone mystery.

In March of this year SE once again decides to send the rumour mills spinning with another patent, though this time less about the gaming aspect (though it is prominent) and more about competing with the Apple iPhone.

This version features haptic feedback gaming keys to allow the user to flip into gaming modes from the usual phone screen, which would certainly help with the problem of the size of the PSP compared to the average mobile phone.

Then, of course, the Chinese and their insane illegal versions of tech get in on the act, by releasing a phone from Hurbo with the PSP logo stuck right on the back.

It basically was ripping off the name in the land of lax copyright, and promised 'PSP emulation' on the spec sheet, though it didn't really help solve the mystery of when the official phone would hit.

And so to the present day, when some heavyweight news not only signals what might happen with the PSP, but the whole of the SE joint venture.

Marketing Week reported Sony was considering going it alone to convert the PSP into a phone, which experts believed would be 'relatively easy' as it already includes WiFi (what about the rest of the connectivity needed for a mobile? No? Let's just gloss over that, shall we?)

Apparently Sony was unhappy with letting its Walkman and Cyber Shot brands cross over to SE territory, and would 'never give its Playstation branding" to SE, believing it to have been a mistake.

So, there we are, up to the present day. Of course, there have been other rumours and ideas flying around (such as the 'scanned' spec sheet recently published) that you may have seen but we haven't covered here, but to be honest there wasn't enough space / they were insane.

In conclusion, if you're waiting for the PSP Phone, don't hold your breath. The Marketing Week article made reference to Christmas 2009, but even that might be a bit soon for a piece of kit that's been in the ether for as long as we can remember.