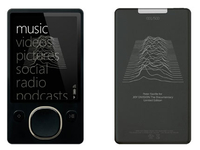 Microsoft is set to launch the Joy Division branded Zune later this month,with a mixed reception from fans of Manchester’sfavourite miserablists.

The Zune also comes loaded up with a copy of Joy Division, a documentary that chroniclesthe life of the seminal band, with a limited edition run of only 500 beingmanufactured

A shared story of innovation

"The band made history with their pioneering digital music. Peter Savilleplaced the music and the band in a visual context equally as innovative. It iscompletely in character for the film to be a debut Zune preload."

"Zune’s involvement with the Joy Division documentary is a way of saying‘Thank You’ to the band for doing what they did, and is not only a tribute tothem but to an entire musical journey through Factory Records and the artistsand movements it spawned," Chris Stephenson, GM Global Marketing, Zune, toldSPIN.com.

"It’s a tribute to deep respect for graphic design that lives on through artistslike Peter Saville, and to independent film-makers that believe in more thanjust commercial success. Ultimately it’s a tribute to the self-belief andself-expression that inspires true authentic art."

The reception to the news in the UK has been slightly lesscelebratory.

"The day the music died… Joy Division was once a cool edgy band for cooledgy kids - and now it's just* marketingtool for corporate America,"spat the ever-venomous Gary Cutlack over on Tech Digestwhen the news of the Joy Division Zune first emerged.

Even more malicious was The Inquirer’s take on the news, with their rather ‘spiky’observation that: "One has to wonder if someone who likes Joy Division wouldwant to be seen dead with a Zune, or would they rather string themselves upfrom the rafters in a terraced house in Manchester."

The Joy Division Zune will cost $399 (£200) and will be available on theZune Originals site in the USon June 17.