Using a mobile in court could land you in jail 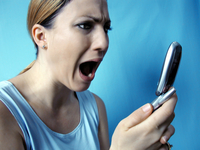 If your mobile goes off in the cinema you'll probably get some glaring looks and not much else, but if it goes off in court, your phone could land you in a whole heap of trouble.

Two men were fined $200 each in America this week for allowing their mobiles to go off while court was in session. The judge held two men in contempt of court after their mobiles rang within minutes of each other.

The disgruntled judge chucked both men in the jury box, and continued with the case he was working on. Once it finished he dished out two identical fines: $200 (£100) or 10 days in jail.

The two men charged were actually in court because of speeding offences. Both Deshawan Cherry and Curtis Freeman (oh, the irony) decided to pay the fines after Herman Sloane, an Atlanta municipal Court judge, gave them the option, with Cherry pleading: "I'm the head of a household. I'm a young entrepreneur. I have a business to run."