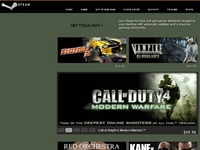 Valve software’s Gabe Newell has thrown his weight behind the argument that PC gaming is not on the wane, insisting that the only problem with the industry is the public perception.

Newell rightly points out to next-gen.biz that US games sales figures collator NPD has only recently started to track MMO subscriptions, and insists that pointing at declining trends is disingenuous.

"Is there a crisis in PC gaming?" Newell asked. "No. But there is a perception problem.

"Only now are organisations such as NPD beginning to track alternative revenue streams (MMO subscriptions, etc) and discovering billions of previously unacknowledged spending on PC gaming."

Valve, of course, has a huge vested interest in the PC gaming market, both with its own critically acclaimed library of titles and its trailblazing Steam digital delivery system.

As an essential add-on to Half Life 2, the system has already been a major success, and has even been heralded as the type of delivery system that can rejuvenate the PC market in years to come.