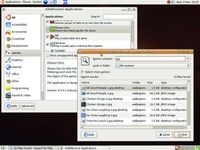 Instead of bringing you tons more iPhone 2.0 news, we’re pretty confident that today will be quiet on that front, so how about starting with something altogether more exciting, in the shape of a new version of Ubuntu Linux for teeny-tiny computers?

Canonical’s excellent – try it if you haven’t – operating system is being ‘remixed’ to fit better onto the new breed of small, low-cost computers the tech world is now dubbing Netbooks.

The free Linux distro is currently on show at Computex in Taiwan, where visitors can debate among themselves about whether the new launcher just adds clutter to already-small screens or makes life simpler.

Meanwhile, back in the real world, Manhattanites are being watched by advertising hoardings with built-in cameras that link to facial-recognition software.

The new system has an eye on profiling the people who look at advertising billboards so that it can adjust electronic displays to match the profile of the viewer.

So, a 15-year-old boy might get a movie scene featuring tedious giant robots, whereas the same poster may play a human-interest angle from the very same movie for a middle-aged woman looking on.

Obvious privacy concerns about being spied on in the name of better commerce are sure to follow if this kind of thing spreads beyond NYC.

OK, here’s a slice of Apple

Next, did you know that Snow Leopard may be made of pure Cocoa? No, neither did we, but that’s what the word on the street says about both the name and programming makeup of the next version of Mac OS X.

Apparently, OS X 10.6 could also run only on Intel-based Macs and is likely to come out next January at Macworld 2009. We can’t wait.

Finally for this morning, we have word that the best media player bar none – VLC – now runs on the iPod touch and iPhone.

You gotta jailbreak your precious gadget to use it, mind, but if you care enough to use VLC, that’s probably ancient history anyway.

That’s it for now, but stay tuned to TechRadar for the rest of the day’s news as it breaks or grab a feed here - get it while it’s hot.