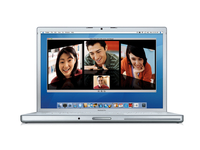 Thursday morning and it seems we can barely keep Apple's name out of the news - if it's not the new iPhone, it's leaks about a rumoured update of the MacBook Pro laptop.

Photos of the casing for the 15-inch model seem to be gaining credibility as the real deal, but speculation remains about several unusual markings on the case.

The most likely scenario is that Apple will allow access to both the MBP's battery and hard drive, potentially making upgrading a lot easier than it is with current models.

Since we're on the subject of that company, remember we told you about Apple's problems with its Canadian iPhone partner setting prices way too high?

Well, it seems thousands of protesting voices have been heard by the network (Rogers), resulting in a *cough* 'special offer' for residents of the frozen north.

Now, instead of needing a second mortgage to own a 3G iPhone, Canadians will be able to simply add a 6GB data pack onto any voice plan for an extra £15 equivalent per month.

Finally for this morning, anyone looking for a low-end camcorder could well be about to raise their sights quite a bit when they see Kodak's new Zi6 point-and-shoot machine.

The cheap ($180, £90) phone-lookalike 'corder is the first budget model we've seen that shoots high-def video - 720p in this case. Naturally, it has presets for a spot of YouTube upload action via a PC. Due to hit the US in September.

Also, we'll take this opportunity to tantalise you with the news that a deep-cover source at one of the major electronics makers has told us that it will shortly be delivering a camcorder that uploads directly to the interwebs without any PC intervention at all. More when we can, y'know, spill those beans.