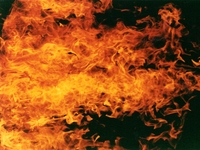 Eighteen teams are to embark on a 2,400-mile road-race across America this Sunday, driving solar-powered cars.

Braving temperatures well into the mid-30s, and without the luxury of air conditioning, the 10-day North American Solar Challenge will test competitors to their limits.

But it's not just the heat they'll be up against. "What's got us worried is the wind," Kathy Van Wormer told the media. "The car is shaped like an aeroplane wing."

According to experts, the bi-annual Solar Challenge advances power management, vehicle efficiency and other technologies essential to getting electric and plug-in hybrids on the road.

A man was arrested for disorderly conduct after rushing into his burning house to save his PC on Sunday night.

Fire crews in Winona were already trying to put out the blaze when the man, who was "obviously intoxicated" turned up, local media reported.

Despite initially obeying police orders to stand back, he later ran inside, battling the flames to rescue his computer. The man was charged with jeopardising the safety of emergency personnel after needing some assistance to get back out.

A holiday-maker told reporters this week of his shock at receiving a £31,500 mobile phone bill after downloading an episode of Prison Break and a few music tracks whilst on holiday in Portugal.

Service provider Yes Telecom - part of Vodafone - initially stood firm over the sky-high charges, but after months of negotiations the bill has, fortunately, now been reduced to £229.

In other news, a former HSBC worker who tried to steal £72 million ($141m) from the bank through a bold electronic ploy has been jailed for nine years.

Meanwhile, if you're planning a crime spree, leave your satnav at home. Chances are it's retaining data that will not only locate you at the scene of the crime, but could also tell police where you've hidden the loot .

We had to include the Walking Head Robot in this week's round-up. Without inventions like these, Weird Tech simply wouldn't be.

Armed with six piston-powered legs, the 4-metre wide robot houses a sinister LCD screen displaying an eerie "human-like" face that can be described only as 'wrong'.

It bides its time standing still, waiting for an unsuspecting victim to walk past - at which point the ultrasound sensors kick in, launching the robot into a disturbing routine of "pre-programmed motions".

And no doubt scaring the living daylights out of all who pass it by. Great stuff.