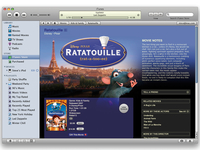 Movie downloads have finally come to iTunes UK, so how does Apple's offering compare with its arch-rivals on choice, compatibility and price. Let's find out, shall we?

Launched on the Wednesday 4 June, iTunes' movie download service promises to finally made it easy and simple to rent or buy movies online.

This has the potential to free us all from hacking down to the video rental shop in the pouring rain, or carrying out the slightly bothersome task of sticking watched DVDs in the post.

iTunes currently has over 700 titles from big Hollywood studios like 20th Century Fox, MGM, Sony Pictures, Walt Disney and others.

Providing the biggest draw are, of course, are recent box office hits like I Am Legend, Cloverfield and Ridley Scott mob flick American Gangster.

What's immediately obvious is that not all titles available to buy are also available to rent - Cloverfield, for example, is only offered as a buy-to-own option at present at £10.99.

The other problem is what you can do with the titles once you've bought them.

All iTunes movies are wrapped in Apple's FairPlay digital rights management (DRM) scheme - which is fine for watching on your Mac, PC or iPod using iTunes.

Unfortunately FairPlay stops you from playing them back either using Windows Media Player or on a portable video player that isn't Apple made. They may be a problem for you, or not.

Oddly you can't rip movies you paid for on to CD or DVD as a backup either, something you have been able to do so far with iTunes music purchases.

This is presumably a condition insisted on by Hollywood, but does seem unfair when you've actually paid to buy the movie in the first place.

Movie rentals are a little more generous. You have up to 30 days to watch a movie from when you download it, then you have a theoretical time limit of 48 hours to finish watching once you hit Play.

Having 700 movie titles available on launch sounds great, until you skim through the library for something to watch - there are a heck of a lot of very old titles on iTunes.

That's a problem because you can buy a physical DVD copy of many movies for a good deal less than £6.99 on the high street. In many cases you can even get them for less than the cost of iTunes movie rentals too.

There are certainly no shortage of user reviews on iTunes where pricing seems to be the chief complaint.

How fast a movie downloads, of course, is obviously dependent on your broadband speed. We rented a copy of American Gangster at £3.49, then had a long 4-hour wait while the 1.9GB file downloaded. Your mileage may vary.

Once thing you'll notice about iTunes movie downloads is that they're available only in standard definition (DVD-quality) guise for watching on your desktop or laptop PC.

High-def rentals and purchases also cost £1 more than in standard guise. That's significantly cheaper than buying a Blu-ray movie, of course, but it's not without limitations.

The chief of these is that Apple TV can only handle video resolutions up to 720p, which means owners of 1080p sets won't be able to enjoy their movie downloads in all their HD glory.

Cinephiles will also be disappointed by the limited sound quality, where you're stuck with Dolby Digital 5.1 surround sound. You won't find Dolby TrueHD or DTS-HD uncompressed audio here.

In fairness to Apple, something obviously has to give when you're talking HD downloads.

Remember HD movies are typically served up on 25GB Blu-ray discs and we're not yet at the stage in this country where Full HD downloads are an option.

At least Apple is trying - none of the other services we're looking at here offer HD downloads in any form.

Lovefilm is chiefly famous for its postal service, where you pay a regular monthly subscription in return for the regular thud of rental DVDs on your doormat.

The rental options are pretty good too, with prices ranging from £3 (for 1 DVD at at time, maximum of two titles per month) to £15 (3 DVDs at a time, unlimited titles) per month.

Of course, the more movies you watch, the better value for the service becomes as there are no additional rental charges. Plus with 65,000 new and back catalogue titles on offer, it knocks iTunes fledging service for six when it comes to choice.

The downside is that Lovefilm's DVD rental service forces you to wait. You can't watch that must-see movie until it arrives in the post - sometimes you may even have to wait much longer than that.

That's because high demand for popular movies can lead you to not getting your first choice first time around. And that's frustrating in this instant gratification age.

You could always buy the movie you really want, of course. Lovefilm will sell us a DVD boxed copy of our chosen flick American Gangster for just £17.93.

Perhaps it's just as well then that Lovefilm also has its own movie download service.

Lovefilm also has a smattering of free movie downloads, although the titles tend to be either ancient, or very obscure (The Cat With Hands, anyone?).

To get hold of movie downloads from Lovefilm, you have to install its Download Manager, which is currently only open to PC users running Windows XP (SP2) or Windows 2000.

Lovefilm says it's working on Windows Vista compatibility, but has no plans to support Mac users.

That's because Lovefilm uses Windows Media 10 for PC downloads and PlaysForSure for portables, forcing out iPod owners - although it complains that it can't offer iPod-compatible downloads either because Apple won't licence FairPlay. Ho-hum.

Lovefilm currently doesn't have any high-def movies available to download. However you can get your choice of over 475 Blu-ray disc and 239 HD DVD titles delivered by post, once you've signed up for one of their monthly rental plans.

ISP Tiscali has been offering its own movie downloads for about a year now, with both rentals and buy-to-own titles up for grabs.

It currently has over 500 titles listed on its site ranging from oldies like High Plains Drifter (1973) to recent box office smashes such as Atonement and American Gangster.

Rental prices start at a reasonable 99p for older titles and rise to £3.49 for the Super High Quality (SHQ) version - which is practically identical to DVD and iTunes versions of the movie.

Buy-to-own costs range from £6.99 for back catalogue titles up to a huge £19.99 for new releases. That makes it significantly dearer than iTunes.

American Gangster is priced at £13.99 (£3.99 than the iTunes equivalent), although you do at least get two versions of the movie - one for playback on your PC, the other for watching on a portable video player.

iTunes, of course, gives you just one version of the movie, but it's been designed to work on both your Mac or PC and your iPod.

Buying a boxed DVD copy of American Gangster from Amazon UK is also cheaper than a Tiscali download in this case, selling for £12.98.

To get your hands on any of the downloadable titles, you'll need to install Tiscali's Download Manager.

This ensures that movies can only be played using Windows Media Player (Tiscali doesn't specify a version) and on a PC running Windows XP (SP2) or Windows 2000.

You have seven days to start watching the movie once it has downloaded, and the download expires 24-48 hours from the time you first hit Play.

BT's Video On Demand (VoD) service offers a choice of movie download and rental options - one from the BT Vision Download Store; and a second via BT Vision PictureBox.

The BT Vision Download Store operates on a similar basis to the others here - you can either rent or download to own.

Rental prices range start at £2.99 for back catalogue titles, rising to £3.49 for new releases. That's reflected in purchase prices with old movies too. They start at £5.99 and rise upwards to £19.99.

As with Tiscali and Lovefilm, buying a movie gives you both a downloadable PC version and another for your portable video player, but BT Vision Download Store also serves up a free physical DVD with some titles too.

The BT Vision Download Store currently doesn't have our chosen flick of American Gangster on its books, although it does have a PC / portable bundle of Cloverfield available for £14.99.

BT Vision does list a number of compatible portable players on its site, so if you own a player like the Archos AV604 Wi-Fi or Creative Zen Vision you're quids-in too.

BT Vision's other proposition is PictureBox - a subscription-based service it has developed in conjunction with NBC Universal.

Every month BT Vision will serve up 28 brand new movies for you to watch for just £5 per month. To watch them, you'll need to get a BT Vision set-top box (currently free) and sign up to BT Total Broadband.

The biggest disadvantage we can see is that you can't actually download the movies to your PC or portable video player.

You just watch them on demand via a regular TV, just as you would with a Sky Movies subscription.

BT Vision says PictureBox serves up movies that haven't yet been shown on terrestrial TV, but you certainly won't find recent box office hits like Cloverfield or American Gangster here.

Again, PictureBox is more like Sky Movies and not really an iTunes rival at all.

Taking each of the services on its merits, Apple's iTunes movie downloads actually comes out rather well.

They're available for the UK's most popular portable video player (the iPod), and they're Mac and PC compatible - something which none of its other rivals can boast.

Compared to Lovefilm, Tiscali and BT Vision, iTunes' buy-to-own and rental prices are pretty competitive too.

£10.99 certainly isn't an extortionate amount of money for a recent release, although Apple could arguably shave 50p-£1 off its rental prices to make them better value for money.

It certainly needs to offer more choice and a greater number of new releases than it does right now.

Ideally these should be launched on the same day and date as their DVD or Blu-ray equivalents.

As for iTunes' chief rivals, they going to really need to up their game too. None of them save for Lovefilm really offers a compelling alternative when it comes to download-to-own, although its rental prices are easily the best of the bunch.

Other online movie rental services in the UK

Like Lovefilm, Blockbuster runs its own DVDs by mail rental service, with prices ranging from £4.99 to £22.99 per month. It currently doesn't offer movie downloads of any kind.

Launched two years ago, Box Office 365 looks to be facing an uphill battle against rivals like iTunes, LoveFilm and soon-to-be-launched rival Tesco Digital.

It currently only has 150 movies to buy on its books, mainly ancient fluff like Carry On movies and some Alfred Hitchcock. Box Office 365 doesn't do rentals.

Unfortunately the website wasn't working well enough for us to gleen any information about its current and future plans, although we know it only supports Windows users and requires Windows Media 9 or later. Our emails to the PR department went unanswered.

The biggest threat to iTunes by far, thanks to Tesco's supermarket superpower and the fact that it's launching its online movie download service soon. We'll bring you more details as and when we have them.

Do you think iTunes' movie pricing is fair? How highly would you rate it rivals? Isn't just easier to buy the DVD instead? Write in and let us know, please comment below