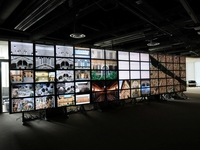 The folks in UC San Diego were in for a big surprise this week when the California Institute for Telecommunications and Information Technology (Calit2) unveiled something it had been working on, the highest-resolution display system for scientific visualisation in the world.

The display called Highly Interactive Parallelized Display Space (or HIPer for short) consists of an unbelievable 287 million pixels of screen res and is claimed to be 10 per cent bigger than the hyperwall-2, a NASA-built system that used to be the biggest in the world.

The display is constructed from 70 high-resolution Dell 30in displays, arranged in fourteen columns of five displays. Each display consists of 2,560 by 1,600 pixels, totalling a massive 35,640 by 8,000 pixels.

Speaking about the giant TV, Falko Kuester, principal investigator of the HIPerSpace system, said: "By using larger, high-resolution tiles, we also have minimised the amount of space taken up by the frames, or bezels, of each display.

"Bezels will eventually disappear, but until then, we can reduce their distraction by keeping the highest possible ratio of screen area to each tile's bezel."

And what are they displaying on the, er, display. Well, it's certainly not re-runs of Hollyoaks, more footage from the National Geographic and the like. Big tigers and lions all round then.