10 apps that would improve the iPhone 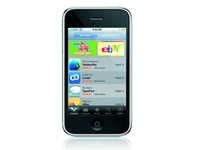 OrbLive – Digital home pioneer Orb has produced a version of its streaming application for Jailbroken Jesus phones and the iPod touch. Connect to the Orb website via Wi-Fi and OrbLive enables you to stream live TV (if you have a TV card in your PC), webcam footage, videos, music and photos to the iPhone.

NemusSync – There was no sign of any Google apps at this year's WWDC keynote – what about an iPhone-friendly version of Google Gears? Until that happens, Jailbroken phones can make do with NemusSync, which enables you to sync Google Calendar with the iPhone's onboard Calendar app.

iPhone Video Recorder – The new iPhone 3G still lacks any video recording functionality. But Jailbroken phones are already one step ahead with apps like DreamCatcher's iPhone Video Recorder. This app records audio and video (at 15ps and in 320x416 resolution) and compresses it into MPEG-4. Handy for those quick YouTube uploads.

Twinkle – While Apple demoed the location-aware social networking app Loopt at WWDC, Twinkle blends location-based functionality with a Twitter client. So if you're a fan of Twittering (and Twitterers), not only can you follow updates on the move, but you can see Tweets from any users in your immediate vicinity.

Fring – What is Fring? It's a service that enables you to chit-chat with your IM contacts on MSN, Google Talk, Yahoo! and AIM. Better still, with Skype and SIP integration, you can also use it to make free calls over Wi-Fi. Yes, you read that right. VoIP on the iPhone.

iCopy – An annoying feature of the current iPhone is its inability to cut, copy and paste text. Until Apple adds this to the firmware, the iCopy app is a step in the right direction. It only works within Safari, but it adds the ability to copy a block of text or a URL.

iWebsaver – iWebsaver is an app that's designed to store web pages (and even WebApps) for offline access. You can't stay connected to EDGE or 3G on a plane, for example, so iWebsaver provides a handy way for iPhone (and iPod touch) owners to stack up content for later browsing.

Listen – Ever heard a song on the radio or on TV and wondered what it was? The Listen app, developed by Erica Sadun, exists to tell you the answer. Listen basically samples the audio via the iPhone's microphone and identifies the song, artist and album via an online server. Clever.

Slingplayer mobile – Reports suggest that SlingMedia will be showing off a version of its SlingPlayer Mobile software for the iPhone at WWDC. Hook a Slingbox up to a Sky+ PVR and you'll be able watch live TV (and what you've recorded) over Wi-Fi. See a video of it in action.

Audiko – Most iPhone owners use the 'Old Phone' ringtone – it's the least annoying of Apple's default selection. For custom ringtones, the Audiko website enables you to upload a song, snip a catchy fragment out of it online and then download the m4r file to your iPhone.