27in OLED TVs to be released within year 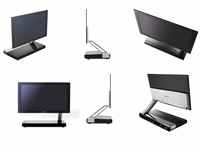 As we revealed way back in October 2007, Sony has been unleashing OLED TVs on the marketplace since the tail-end of last year. Currently the only size available was a diminutive 11in.
Now it seems that the company has big plans for the wafer-thin TV technology, with the announcement that a 27in model will be available ‘fairly soon’.
Speaking at The Wall Street Journal's ‘D: All Things Digital’ conference in California on Wednesday, Sony’s CEO Howard Stringer said: "This is 0.3 millimeters wide, it's a glass, we can produce this in plastic and you can wrap it around your arm [but] we're not quite sure why you would want to.
"We're looking for applications for the next generation of the plastic version but this will come out in a 27-inch version fairly soon… Within the next 12 months."
Little wonder
OLED technology is still in its infancy. Two things that have stopped the technology taking off so far is the small size of the TVs and the price tag. The 11in XEL-1 was released with an expensive ¥200,000 (£850) price tag. That’s £77 per inch.
Although there’s no word on the price of the 27in model, if it’s not too steep, then the 27in XEL-1 might be the model to catapult OLED systems into the mainstream marketplace.