3G iPhone: is it coming to the UK? 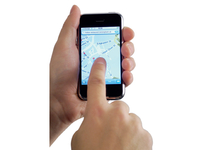 It’s a tricky thing, the old rumour. We don’t even have the 3G iPhone confirmed, yet already there is talk about this feature and that feature being in it; whether it’s going to come here first, or to that country before all others.

The chaps over at CNET have made a pretty good case for why the new model WON’T be over here any time soon, but it seems they may have jumped the gun a little bit.

Our pals at T3.com have picked up some info from O2 insiders that the company is expecting a hectic day 9 June, and will be "very busy" the first week of July, the anticipated date of release for the new iPhone.

Hype: is it too much?

Never before has a phone gained this much hype before it’s even been announced, and while Apple’s market share has dipped in the US at least, the rival devices from HTC and Blackberry (the Touch Diamond and the Bold respectively) must be quaking in their pre-release boots somewhat.

Make sure you check back to TechRadar regularly in the build up to the launch, as we’ll be publishing all the good (and not-so-good) rumours before our in-depth coverage on Monday.