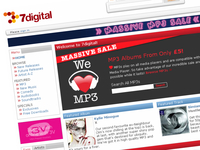 7digital.com reports this week that its sales have rocketed since the introduction of DRM-free music from major labels Warner and EMI, making it the UK's second biggest digital music retailer, after Apple's iTunes.

You will remember that 7Digital.com was the first European company to get the DRM-free MP3 rights to Warner Music's extensive back catalogue.

The company now reports that sales have increased 300% year-on-year over the last year (year ending June 2008), a considerable difference to the ongoing problems faced by music retailers dependent on the sales of physical CD and DVD discs.

"This format makes the digital music proposition simple for consumers with one universal format for all devices. Music lovers are beginning to realise that owning an iPod doesn't mean just buying tracks from iTunes and, in fact, MP3's are far superior in terms of compatibility. Since the introduction of EMI and Warner Music's DRM-free catalogues we've been attracting increased numbers of iPod and iPhone users, as well as those using Samsung, Nokia, Blackberry, Sony Walkman devices and mobile phones."

With the introduction of Warner's MP3 catalogue, approximately 80% of 7digital.com's 4 million track catalogue is now available in the MP3 format.