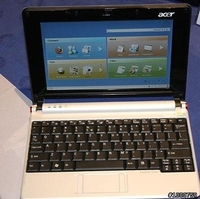 Rumours and a picture have surfaced at what is believed to be Acer’s attempts to get involved in the burgeoning sub-notebook industry.

With rival Asus’ Eee carving a whole new niche in the market – many of the major manufacturers are looking to jump aboard the low-cost, small-screened market and it, with Dell, Samsung, HP and MSI all realising or planning rivals.

Acer will almost certainly be joining them, and the latest rumours on*UMPC Portal are that the ‘Acer Aspire One’ will be offering a 8.9 inch screen, Intel’s new 1.6 GHz Atom processor and Windows XP.

The screen size would suggest a 1024x600 resolution, a major factor in enjoyable web surfing, and the device could be manufactured by Quanta.

Pricing is still a mystery, although Digitimes has suggested it could be a very competitive €299 (£235).

We’re contacting Acer UK for some information, but there’s been no official word.