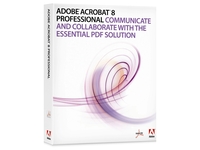 Adobe Systems Inc, designers of Photoshop and Acrobat, reported a net income of $214.9 million - 40 cents per share - yesterday, compared to $152.5 million (25 cents per share) in this quarter last year.

Chief Executive Shatanu Narayen said the profit boomresulted from a burgeoning demand for digital content, and from the fact that theSan Jose-based company's geographic reach and product mix are very diversified.

"The amount of video that's being used on the Webcontinues to explode, and I think frankly we are very early in people usingvideo on the web," said Narayen.

"The desire to continue to consume personalised contentis going to continue for a long time."

While Adobe expects third-quarter earnings of between $855and $885 million, rising oil prices might start to prove a financial obstacleeven for them.

Global Equities Research analyst Trip Chowdhry said: "Every customer of Adobe, direct or indirect, is beingcrunched because of the oil prices.

"Even if technology companies are getting a pass so far, assome analysts believe, each segment will eventually be hit.

While Narayen would not elaborate on Adobe's expectationspast the third quarter, he disagreed that demand for Adobe products could soonfall.

"We always say we are not recession-proof, but Adobeis also not one of those providers of luxury goods," Narayen said.

"It's a productivity tool that enables knowledgeworkers to be more productive, and so maybe our impact is a little more mutedthan some other companies."