AMD posts loss of over $1bn 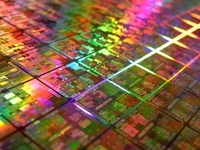 In what proved to be a difficult day for Intel, losses of $1.2 billion (£600m) were announced for the second quarter and Hector Ruiz quit as the company's CEO.

Although their operating loss was a mere $269 million, AMD is taking a charge of $876 million against the purchase of ATI - and abandoning the handheld graphics and digital television markets.

Putting a positive spin on things, AMD's report pointed out that '30 platforms based on Quad-Core AMD Opteron processors are now shipping from AMD's largest global customers including Dell, HP, IBM, and Sun Microsystems,' and that the 'ATI Radeon&trade; HD 4800 graphics products captured the performance crown at their respective price segments'.

Barcelona - how can I forget?

What it doesn't point out is that it has been a tough few months for AMD, who are now looking to get their Barcelona out of the door.

Ruiz's exit has brought chief operating officer Dirk Meyer in as the company's new chief exec, with the former believed to be moving to an executive chairman.

"Dirk's election to CEO is the final phase of a two-year succession plan developed and implemented jointly by AMD's board of directors and executive team," said AMD.