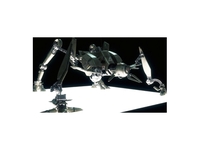 Thought the Xbox 360 and the PS3 produced top-notch graphics,unlike anything you have seen before? Think again, as AMD has beendemonstrating a cinema-realistic gaming experience that's nothing short ofimpressive.

Touted by its makers as Cinema 2.0, this new gamingexperience utilise teraflop chips to create near-lifelike animations.

Speaking about the new tech, Rick Bergman senior vicepresident of AMD said it's "a milestone achievement in ultra-realistic andinteractive visual computing." And "more powerful than every generation ofgame console every brought to market combined."

Demoed in San Francisco,the chips behind the awe-inducing graphics are codenamed RV770 andhave even got A-List approval, with film director Robert Rodriguez commenting: "Theindustry has been dying for this."

The demo that was shown used twoRV770 graphics cards rated at one teraflops each, driven by an AMD Phenom X4quad-core processor and AMD 790 FX Chipset. Powerful stuff.

The demo was to show the power AMD is capableof, but don't expect the tech to come to the consumer market just yet. What's hitting shelves soon is the Radeon 4000 seriesrange of graphics cards.