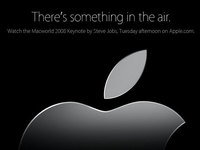 Apple has announced a record profit for its third quarter results, with the success of the iPhone, iPod and a massive growth in Mac sales responsible.

The Cupertino company posted a net quarterly profit of just over $1 billion - a 38 per cent rise on last year's profit of $818 million.

International profit played a hug part in the success with 42% of revenue coming from foreign (ie non-US) markets.

The biggest winner for Apple aside from the impressive iPhone was Macintosh computers - with the company declaring that 2,496,000 Macs were shipped in the quarter - a 41 per cent increase year on year.

"We set a new record for Mac sales, we think we have a real winner with our new iPhone 3G, and we're busy finishing several more wonderful new products to launch in the coming months."

Indeed the stand-out success of the new iPhone 3G will be another boon to Apple, which has already declared a million sales in the opening three days after its July 11 release.