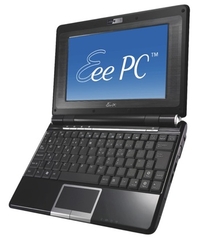 The Eee PC 904, featuring Asus's new fuller-sized, more comfortable keyboard is going to cost a mere £269 (inclusive of VAT), when it ships in the UK in mid-July.

The Eee news is revealed exclusively today by What Laptop who note that - whatever you call them sub-notebooks, mini-laptops or Net-Books - Asus continues to dominate this burgeoning market.

"Asus is leading the way in terms of variety and choice. In less than a year it has brought no less than four different versions to market, starting with the 701 up to the imminent arrival of the Eee PC 1000," notes What Laptop.

"To hit this price point there are other differences. For instance, you won't find an Intel Atom inside. Instead, the 900MHz Celeron M used in the 900 will power the 904 and be backed by 1024MB of memory. As with the 1000, you'll find an 80GB laptop hard drive in there and it will ship with Windows XP as standard. Asus is claiming a weight of 1.4kg.

The report also notes that Asus has "re-aligned the pricing of its Eee PC 901&hellip; [which] will now sell for £299 (inc. VAT), instead of £329 (inc. VAT) as initially announced, making it even better value."