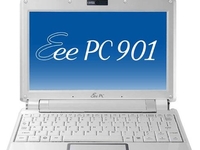 With pictures surfacing and confirmations aplenty earlier in the year, the Atom based 901 and the bigger screened 1000 are no surprise as the company looks to cement its place at the head of the burgeoning sub-notebook market.

It was Asustek’s Eee PC 701 that shocked the laptop market by becoming an instant hit – with its small form-factor and low cost immediately winning a legion of fans.

Although the successors to the 701, the 900 released in April and both of the new models unveiled at Computex are higher cost, they are also boast better specifications inclkuding bigger screens and more storage – as well as the option of Windows XP instead of the Linux OS of the original.

The Eee 1000 has a 10 inch screen, a keyboard that is apparently 92% full size and the energy efficient Intel Atom processor that brings a potential battery life of 7.8 hours according to Asus.

The 901 also uses the Atom processor, has an 8.9 inch screen and, just like its big brother has Wi Fi and Bluetooth. Asus will also show off a WiMax version of the 901 at Computex.

"With constant innovations and implementation of the latest technologies in the new Eee PC™ range, we have since expanded the original 3 'E's into 'Easy', 'Excellent' and 'Exciting'," said Jerry Shen, CEO of ASUS.

"'Easy' will still encompass the core value of easy to learn, work and play, 'Excellent' will highlight the Eee PC's role as an excellent mobile Internet device and 'Exciting' entails utilizing the Eee PC for exciting multimedia enjoyment."