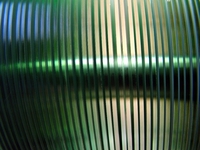 Since its inception in 1982 there have been numerous attempts to introduce a CD that can reproduce recorded music more faithfully than the plain vanilla disks, but none has met with much mainstream success.

Now, to a list that includes SACD and DTS-CD we can add HQCD, or High Quality CD - a new development from Japanese firm Memory-Tech that promises a better quality of audio.

Memory Tech, which makes about 30 per cent of Japan's recordable CDs, claims its HQCD technology allows CD players to read the data on disks far more accurately than they can conventional disks.

It has achieved this by creating a plastic that lets light penetrate more easily and swapping the aluminium coating of normal CDs for a silver alloy that reflects better.

The company will be making two million HQCDs a month and plans to have enough ready for the first commercial HQ releases to be in Japanese shops in September.

In the absence of any official comment, it's unclear if HQCD will make any impact overseas or if it will do a MiniDisc and stay mostly confined to Japan. We'll keep our ears peeled for you come September.