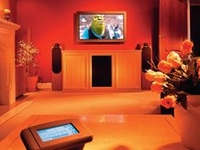 As trade expos go CEDIA is one of the most welcoming. Found in a corner of London's ExCel centre - this year it was directly opposite Microscience 2008 - the parade of stands is big enough to invoke the 'wow' factor but small enough to get around in one day.

TechRadar's first port-of-call was Loewe. A meeting with the MD of the company Kevin Kelly was on the cards.

Though the company had nothing new to offer, its high-end and beautiful-looking TVs were showcased, with the latest Connect range, offering networking abilities of a computer.

So, you can essentially play back in your living room any multimedia files you may have on any PC around the house. The company has even added a new colour to its range, iPod white. The 37in model that we were shown is out now for £1,949.00.

If medium-sized HDTVs aren't your thing, then Runco's offering may well be. The company's Reflection RS-900 DLP home cinema debuted at CEDIA and looks like an impressive bit of kit.

Sporting Vivix digital video processing and something called SLIC (Selectable Lamp Intensity Control) which changes the lamp intensity depending on the screen size you are using.

The projector is said to work just as well with DVD as it is with hi-def material and offers 1080p Full HD picture performance. All this for the low price - low compared to some DLPs - of £8995.

Nine grand is pocket-money compared to some of the offerings on show at this year's CEDIA. Everywhere you looked there were boys' toys that would be perfect for those who believe that money is no object.

The one that garnered the most attention was the Ovei. This egg-shaped pod is the ultimate accessory for those that want their own personal home cinema space.

Made by the guys at F1 and designed by Lee McCormack, the pod was a definite crowd pleaser. 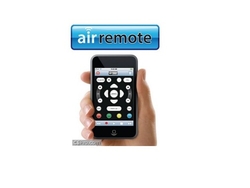 Much more TechRadar's budget was a new iPhone app, the AIRremote.

The device will be available from the Apple App store 11 July and it allows you to control your Sky box, DVD player, iTunes and anything else in your home entertainment system for just £50.

And for those without a WiFi setup in the home, simply buy the IR extender to use with the system for £100 and you will be able to control most things through your humble iPhone or iPod touch. Nice. 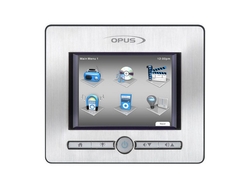 Multiroom and touchscreen systems were everywhere you looked at CEDIA this year. And the technology inside is making the systems not only look nicer but easier to use. A pick of the best could be found on the Opus and the Crestron stands.

Both companies have created touchscreen tech that can be implemented into any home cinema setup and allow you one-touch access to things like your security systems, TV and DVD players. The latest touch-panels on show were the Crestron TPS-6X and the OPUS WCU600.

Another of the big stand this year was owned by Pioneer. The company chose CEDIA to showcase some of its already announced new TV and Blu-ray line-up for the first time in the UK.

The new KURO PDP-LX5090 50in TV looked impressive in the, er, flesh, as did the company's first front-screen projector, the KRF-9000FD. Speaking to one of the exhibitors at Pioneer he said that the projector was based on JVC technology.

The company also used the show to unveil a new SACD receiver, the PDX-Z9 an OLED display, internet radio and touch-sensor technology. 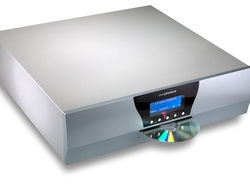 Living Control was another company to use CEDIA to show if its new range of audio equipment. This one is strictly for those looking to pay a premium, however.

The MusicBox RAID is a state-of-the-art music server. Building on Living Control's successful MusicBox range, the RAID series is a successor to the MusicBox NT range, adding Wi-Fi technology and even more hard-disk space.

The RAID now comes with 2TB storage, which should be plenty of space to house all your media, and is available now for £4,995.

From hi-fis to hi-def cinema, speakers to cables, CEDIA is a place that offers the AV specialist anything they could possible want all in one place. If you weren't able to make it this year, then be sure to book your ticket for 2009, as the show will be even bigger.