Consoles versus PC: is it game over for the PC? 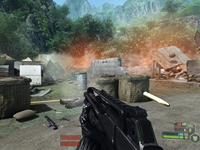 With news about PC version of GTA IV still unconfirmed, it's no surprise, the old PC vs console debate had reappeared.

Every time the 'PC vs console' question comes up, the pattern is the same: a console manufacturer releases its latest and greatest system, which blows everyone away with its graphics and apparent power. The PC, as the most powerful system on the block, looks weakened.

But there's a catch: consoles don't offer any scope for upgrades. They quickly start lagging behind what PC developers can do – to say nothing of the fact that, as console games are coded on PCs before going across to their destination, we have a certain amount of home advantage. New graphics cards and processors – most recently, dual/quad core – quickly make the PC the most appealing platform for developers who really want to stretch their technical muscles.

Will the cycle repeat this time? Certainly. However, the threat this time is slightly more complicated, and publishers that fail to adapt are likely to be left behind.

The end of the console exclusive

Commercial games, particularly so-called triple-A games such as GTA IV, cost a phenomenal amount of money to create. The only way to recoup that amount is to sell games – and most simply don’t. It’s a publisher’s big successes that really pay the bills, with many well-known developers surviving project-by-project.

What this means is that the era of the 'console exclusive' is effectively over. A handful of games aside (typically those owned by a console’s manufacturer, as happened with Halo on the Xbox), publishers can’t afford to exclude either Xbox 360 or PlayStation 3 users – or, more specifically, their wallets.

Other major games, including GTA, are being targeted at both platforms, with the only exclusivity coming in the exact details, such as Microsoft paying a phenomenal $50million for dibs on its downloadable content.

This leads to a situation where, while the manufacturers and fans alike are quick to trumpet the technical benefits of their platform, in practice it doesn’t mean much. The less powerful machine sets the level, preventing the game from being all that it could be if it was specifically written to make use of the hardware available to it. On the PC, a mix of hardware and scalability options offer much more flexibility. You can’t play Crysis at its best on a £500 PC… but you can play Crysis.

This begs the obvious question: if cross-platform is such an important part of the industry, why are PCs left out of releases such as GTA IV?

On a smaller scale, Iron Lore entertainment faced an uphill struggle to explain that the sudden drops to the desktop were a result of anti-piracy measures rather than a programming error.

The irony is that all of this protection is really only aimed at so-called ‘0- day’ releases – games leaked to the pirate market before they actually appear in the shops.

This is typically seen as a PC-only issue by the market, but that’s not true. People were downloading and playing GTA IV the week before hundreds of people queued up for a midnight launch. The catch is that on a console, you have to get physical modifications done to your system before it can be used to play pirate games, which is a big technological jump from just running a file – and brings the risk of losing online access.

While waiting for the cycle to turn back to PCs, two major genres are soaking up much of the cash – casual games and MMOs. The most successful PC games of all time aren’t the likes of Doom or Command and Conquer, but The Sims (plus its sequel and million expansion packs) and World of Warcraft (11 million players and counting).

The Sims offered something both new and immediately appealing; World of Warcraft took the geekiest genre on the planet and made it mainstream through careful design and the goodwill built up over a decade of its creator Blizzard making nothing but amazing games.

It’s this kind of expansion that the PC is in a position to do right now – to spread the joy of games to a whole new audience. And when the technology turns, they’ll still be there.