Convergence gadgets: the weird and wonderful 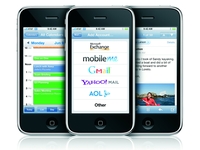 Ah, convergence - that lovely marriage of previously separate things to create a magical third - think peaches and cream, Morecombe and Wise, Linux and the Eee PC.

Already dubbed the iTaser by bloggers, the Taser C2 sadly isn't available to own in the UK. You can buy one Stateside for around $80 (£40)

The concept seemed noble enough, but the execution was horrible. For the original Em@iler (even the name makes you shudder) was a Frankenstein product.

It married a cheap-looking home phone with a wired pull-out QWERTY keyboard and a laughably bad monochrome LCD display. Its successors weren't much better. Why?

Sir Alan Sugar was apparently so convinced that the Amstrad Em@iler would be a success he apparently lost millions trying to make it one - despite all evidence to contrary.

Amstrad CEO Bob Watkins even resigned over it, allegedly.

The Panasonic DMR-EX88 is a case in point. It manages to combine a 400GB hard disk drive with a CD player, DVD player and DVD recorder, throws in a digital TV tuner with Freeview Playback; and then adds a USB port and SD memory card slot. Phew.

Reassuringly Victorinox also sells a version (the S.Beat MP3 Flight) that enables you to remove the MP3 player. This has the benefit of still enabling you to enjoy your music, without being zapped by iTaser-toting WPCs - the knife bit can safely be stowed in your suitcase or simply left at home.

The reasoning behind it seems understandable. Why?

You'll be able to use the TV fridge to watch cookery programs on its 15-inch display.

A built-in internet connection you can download recipes - you have to hook the TV fridge up to an off-board PC instead;

No exploration into the highs and lows of consumer tech would be complete without name-checking Brando - a Hong Kong company that specialises in weird USB peripherals.

Highlight on its website include a USB Skype Mouse, which adds a internet phone to the humble PC mouse, the Casio USB Mouse Printer, which throws in a printer.

Our favourite has to be Brando's USB Slippers, which use the Intel-invented connection to keep your feet warm in the office. Marvellous, or awful, depending on your point of view.

Which convergence gadget would you praise to the hills, and which would you take out the back to be shot? Let us know, write in the comments below!