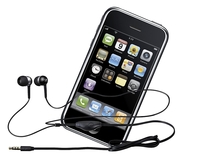 Unlike most countries, Japan isn't going iPhone crazy at precisely midnight on the morning of 11 July. Instead, the sole carrier there is planning on keeping most customers waiting by holding off until lunchtime that day.

Softbank Mobile announced this morning that it would put the new iPhone on sale nationwide at noon on Friday. Prospective customers will therefore have all morning to weigh up the approximate minimum ¥7,000 (£33) monthly price-tag for the phone with unlimited data but no bundled voice calls.

However, high-rolling Tokyo residents get the special treatment they're accustomed to and can pick up a new Apple phone from 7am at Softbank's flagship shop in the shopping district of Omotesando.

Even more peculiarly, Masayoshi Son, the maverick head of Softbank, will make a special appearance at a third-party electronics retailer at - we're told - exactly 11:10am on Friday to kick off the 'official' launch party.

Quite why Son wants three separate launch times is anyone's guess - perhaps he wants to confound the sceptics who are sure the iPhone will flop in Japan. After all, three launches are better than one, right?