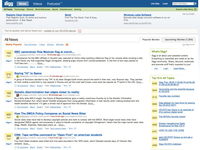 Digg has gotten too big for its boots. The makers know this and that is why the website has put some new tools into private beta to narrow the stories you have to sift through.

The Digg Recommendation Engine is a new feature that links up stories you have dugg to ones that you might like to Digg.

Once the feature is launched, in the Upcoming section of the site will be a list of recommended stories. Above the story, some text will tell you who has recommended the story. There will also be a compatibility percentage next to the user. The higher the percentage, the stronger your connection with the user.

Confused? Don't worry as Digg has released a video to guide you through the new feature.

Essentially, Digg is creating a map of people with similar tastes and narrowing upcoming stories down according to your taste, so the website will be easier to search.

Those that aren't happy with the Recommendation Engine can simply revert back to the normal Upcoming section of the site.

This new tool has been put in place as Digg now gets up to 14,000 stories a day fed to the site, so trying to navigate through all these stories is nigh-on impossible.

There's no news as of yet, when the service will be put into public beta.