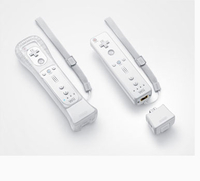 Wii MotionPlus maps the players hand movements in 3D space, a notable improvement on the current infra-red motion sensing technology, which has come in for consistent critcism from gamers since the launch of the console.

The timing of the announcement is also important - merely hours before the official Microsoft 'presser' which kicks off shortly. Stay tuned for the full run down of all the news from that event from our guys on the ground, as it happens.

You can see from the picture of the Wii MotionPlus that it attaches to the end of the current Wii Remote. A clever move from Nintendo, who will of course play the PR game of not overtly claiming that the original Wii Remote's infra-red tech was in any way problematic.

"The Wii MotionPlus accessory attaches to the end of the Wii Remote and, combined with the accelerometer and the sensor bar, allows for more comprehensive tracking of a player's arm position and orientation, providing players with an unmatched level of precision and immersion.

"Every slight movement players make with their wrist or arm is rendered identically in real time on the screen, providing a true 1:1 response in their game play. The Wii MotionPlus accessory reconfirms Nintendo's commitment to making games intuitive and accessible for everyone. Nintendo will reveal more details about the Wii MotionPlus accessory and other topics Tuesday morning at its E3 media briefing."