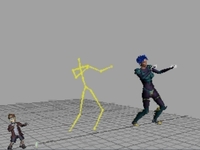 My how things have changed! TechRadar has just got back from an exclusive demonstration of the world's first markerless motion capture technology that's just landed in the UK.

Made by Organic Motion, a New York based company, the new system takes the strain out of motion capture.

Essentially, you don't have to wear any special suit, add markers to your models or calibrate flashing dots. All your model has to do is enter the specially created set - completed with 14 LED-based cameras on a rig - and away you go. There's not a ping pong ball in sight.

Andrew Tschesnok, the CEO of Organic Motion who was in London for the demonstration spoke to TechRadar about his revolutionary product.

"I started writing the software for it back in 2002. But it was in 2007 that industries started to come around to the idea of markerless mocap (motion capture).

"We first started using the process in 2007 in the medical industry. Here it was revelatory, as it was being used on children with cerebral palsy.

"Our system BioStage took the hard work out of motion capture, meaning that you didn't need to go through the laborious process of attaching markers to what are poorly children.

"BioStage meant that doctors could get instant scans of a child to analyse and evaluate."

Organic Motion has taken its system to the next level. Called Stage, the markerless mocap can be used anywhere from sports shops to film production companies.

Studio 7 is the first UK company to get its hands on Stage, and it was in this company's offices the demonstration took place.

Studio 7 is an offshoot of Atticus Finch, a production company based in London that has worked on music videos for the likes of Depeche Mode and commercials for artists such as Goldfrapp, Richard Hawley and Moby.

Managing Director of Studio 7 Chris Richmand explained to TechRadar why he was interested in operating a Stage setup in the UK.

"I was in an airport waiting to go on a flight and I read an article about what Organic Motion were doing and wanted to be a part of it.

"So I met up with Andrew and his team in New York and we sorted out a deal.

"It's fantastic that we've got the first Stage system in the UK, in fact, Europe. The technology means that smaller production companies who thought that motion capture was out of their price bracket can come and utilise the system."

Watching Stage work is impressive. The ease of use is remarkable. A special white cloth is draped over 256sq ft of space in the studio, and 14 specialised 2D cameras - rigged with highly sensitive LEDs - are set up on a rig.

The data output from each camera is fed into a vision processor (essentially a big black box) that maps every pixel of information and triangulates the location of the subject by seeing where the various camera images intersect.

All this is done in real-time and the precision of the detail is said to be down to a millimetre.

The demo we were shown was of one of Organics Motion's staff jumping up and down, spinning around and 'dancing' - all the time this info was fed into Autodesk Motion Builder (motion capture software) while essentially controlling six avatars simultaneously.

Richmond thinks that Stage will completely change the way pre-visualisation in the film and TV industry will work: "For me, this system has opened up a whole new revenue stream.

"Production companies can come here and in minutes pre-visualise a scene, and have a working and moving storyboard for their project. The implications for this technology are huge."

The Stage is Open

Organic Motion's CEO isn't just content with getting his technology into production companies. He's also looking at ways to get markerless mocap out into the consumer market, using the OpenStage system.

"We have a big yet-to-be announced deal with a sports retailer that will get our technology into shops all around the world.

"Just think, you go into a sports shop and within minutes they can analyse your golf swing and give you 10 pages of data about what club would be best for you.

"The same with running, they put you on a running machine inside an OpenStage setup and they can analyse every single angle of your run and recommend the best shoes for you. It's fantastic that our technology can do that."

The possibilities for markerless mocap are endless. And it's not just in the real world that the technology can make a difference.

At CES in January, Intel chose Organic Motion to show the possibilities of the internet in its keynote speech.

"Intel asked us to do a demonstration of our product to show what the internet would be like in three, four years," said Tschesnok. "So we showed them Web 3.0 - where in places like Second Life, you don't control your avatars by the use of a keyboard.

"Essentially, with the help of Stage, you are your avatars. Soon it won't be Second Life, it'll be Third Life."

Leaving the small studio in the heart of Shoreditch, Hackney, TechRadar got the feeling that Organic Motion are on the cusp of something big with Stage, BioStage and OpenStage.

Its collaboration with Studio 7 means that this revolutionary tech is in the UK and will soon be used by production companies everywhere.

Motion capture won't just be confined to Hollywood anymore, it's about to become here, there and everywhere. Now, about my golf swing&hellip;