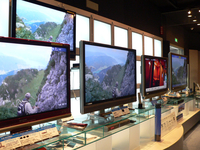 Sometimes we learn amazing things on our travels in technology, such as the fact that everything with a Sharp logo on it, from Aquos televisions through to laptop computers, is named after a pencil - the Ever-Sharp pencil, which was the company's very first product, back in 1915.

In fact, we even got to see the century-old propelling pencil in the flesh this week at Sharp's Tokyo showcase, which we visited for a closer look at where the firm has come from and where it's going.

These days, however, Sharp's focus is a lot clearer - not by necessity, but because of powerful market forces that make the flat-panel television sets that grew out of that tiny LCD on the 1973 calculator an extremely valuable arena in which to do business.

That LCD chunk covers sales of complete screens to other device makers for use in phones, PDAs and the like, as well as flat panels for TVs that are assembled by other manufacturers.

LCD for the future?

In spite of those huge numbers, investment in LCD is still continuing at breakneck pace at huge new factories such as the one at Kameyama in the west of Japan.

But why is Sharp investing so heavily in LCD when we hear so much about attention-seeking new technologies that make LCD seem like yesterday's news?

Sharp's Miyuki Nakayama explains: "LCD isn't mature yet - there's still a lot to come in the future. For example, we can increase the resolution of an LCD screen to four times that of 1080p, or 4K2K resolution."

And there's more: "LCD displays are likely to expand into new places,such as car dashboards, plane cockpits and plenty more. In fact, we can't really disclose it, but some car makers are already using our LCDs that way."

New displays not a threat

So, what about the upstart technologies we hear so much about, such as the organic screen found in Sony's lauded XEL-1 television set?

Nakayama says: "Organic EL screens like that just aren't a threat to LCD and they won't be for at least another decade. The picture quality is superb, but the screens don't last long and they can't easily be made bigger."

Such confidence is unusual in an electronics firm, but the boom in new TV sales ahead of the switch to digital that's happening all over the world (2011 in Japan) suggests that it isn't misplaced, particularly as all kinds of display will see a sales spurt.

So, what size of screen can we expect to see in our local electrical shops over the next few years then? Sharp's newest LCD plants are churning out so-called eighth-generation motherglass sheets, from which the actual glass you see in a flat TV is cut.

Those 8G sheets measure 2,160 x 2,460mm and are perfect for slicing out eight panels suitable for 40-inch LCD TVs. But that's the present and the size of TV panels needs to be planned two years ahead of time.

All of which means that the 10G sheets Sharp plans to bring on line in 2010 give us the truest indicator of what we'll see soon after. Those will be 2,850 x 3,500mm, which is good for six whopping 60-inchers at the top end.

But will we buy such monsters in any sort of quantity? Nakayama again: "We did some research a while ago and found that when people replaced their CRT televisions of around 26 inches they went for 32-inch LCDs, but soon wanted something larger.

"The reason for this was quite interesting - LCDs are much thinner than CRTs, of course, so they got pushed back against the wall, which, when viewed from the same sofa position, appeared smaller than the old TV set."

So, given that Sharp's largest commercially available screen measures an imposing 108 inches, we could be in for some seriously crowded living rooms.

Kidding aside (the 108-incher isn't actually a TV), at least those of us investing in LCD tellies now can feel safe in the knowledge that the technology isn't going to do an HD DVD and curl up its toes anytime soon.