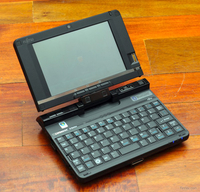 While the MacBook Air may well be the slimmest computer on the market right now, the newly unveiled Fujitsu Lifebook U2010 could well be the next must-have laptop for fashionistas on the move.

And all of that in this rather fetching case, weighing in at only 680 grams (about 1.5 lbs).

The spec has already got us salivating. We're awaiting further information on costings and release dates from Fujitsu right now. The US cost is rumoured to be in the region of $1300, which is around £650 of your English pounds.