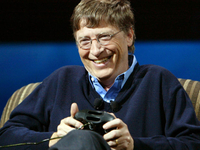 Bill Gates will step down from his job at Microsoft to focus on his charity work - after revolutionising the computer industry since the 1970s.

Gates' announced his decision to retire from the company last year, and his last day will be a sad one for an industry that he and his company Microsoft has changed entirely since he and partner Paul Allen produced DOS for IBM in 1980.

In fairness, Gates has not been the pivotal figure at Microsoft for some time, with the likes of Ray Ozzie and Gates' old friend Steve Ballmer becoming more influential as Gates' attention has switched to his charity - the Bill and Melinda Gates Foundation.

But Gates' influence on the company cannot be understated, and although he has signalled his intention to come into the office to focus on his pet projects, he will not be involved in the day-to-day running of the Redmond based company.

After becoming obsessed with computers at school, Gates and Allen's decision to cling onto the rights of their DOS program - developed at the behest of IBM - ultimately led to dominance over the growth industry of the last 30 years.

Gates and Allen licensed their MS-DOS to the host of manufacturers looking to build their own versions of IBM's PC and it gave them the impetus to branch out.

Windows, a graphical interface for their MS DOS and the Operating System, was the next major landmark for Microsoft, and soon became ubiquitous.

It's not all been plain sailing for Gates, however, with a high-profile anti-trust case over the bundling of internet explorer cost the company millions of dollars.

Recently, the failure of the latest Windows version Vista - to match its predecessor XP's success - and the dominance of Google in the online realm have raised questions about the future for Microsoft.

But, Gates' role as one of the most influential figures in the rise of the computer is assured, and his final day will be seen as the end of an era for both Microsoft and the PC.