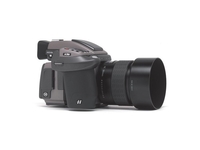 Medium-format camera manufacturer Hasselblad has announced a new camera that is the ultimate in imaging technology.

Sporting an unbelievable 50MP, the H3DII-50 utilises a Kodak 50MP 36×48mm - which is twice the size of a normal 35mm DSLR sensor, and is claimed by the company to be the world's largest.

, The H3DII-50 is quite obviously not a camera for your average snapper. As is the case with most Hasselblad cams, its latest release is aimed squarely at the high-end commercial photographer who, according to the company"requires the ultimate in both image quality and performance."

So, what can you expect from the H3DII-50? For a start, the camera produces some of the most hi-resolution files available, with images coming out at 300MB. Then there's the 1fps capture rate, which for a medium-format is very fast indeed.

The H3DII-50 will be released in October for the bank-breaking sum of £18,500. Get in quick, though, and you will get a free lens, according to the blurb on the website.