How to profit from online poker bots

Poker, with its outlaw image and Midwest jargon, is an oddball sort of game. But it’s also uniquely academic, in that the game remains ‘unsolved’.
While algorithms exist that can play more-or-less unbeatable games of chess, backgammon and draughts, poker – at least, today’s popular ‘No Limit’ version – remains something only humans can fathom.
At least, that was the accepted wisdom until one January afternoon, when an online poker player known as ‘Trebek’ logged onto his usual poker site…
Counting cards
That day, there were hundreds of games in progress, but Trebek wasn’t there to play: he was conducting reconnaissance. He tapped a few usernames into PokerTracker, a data-mining application popular with online poker players.
He had configured PokerTracker to silently observe several weeks’ worth of games, providing him with a rich cache of data he could crunch to reveal weak players – ‘fish’ with potentially profitable weaknesses.
As Trebek prowled for prey, three players – ‘1forthethumb’, ‘full_tilting’ and ‘0_drunkenboxer’ – caught his eye. However, as he pulled up their data, he realised something remarkable – each of the three played an identical strategy.
He had collected dozens of statistics on each – how often each player went to ‘showdown’, how often they made a continuation bet on the turn, how often they raised on the river – and each stat was similar.
Furthermore, these players spent hours playing each day, with no break. Across the whole poker site, among tens of thousands of players, nobody put in more hours than these three players.
Rise of the poker bots
Trebek had been looking for fish. Instead, he’d found bots. “I just sat back in my chair stunned, watching them for a while, trying to absorb the significance of what I was watching,” he posted to his poker newsgroup. “It’s one thing to talk about bots, but it’s quite sobering to actually see them playing in front of you.” 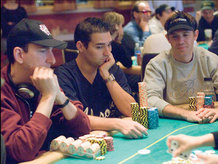