How to survive a hard disk disaster 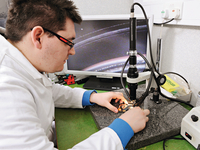 If your Mac is failing to boot or your hard disk is making ominous clicking noises, an option is to send your hard disk to a data recovery specialist. We visited Kroll Ontrack at their facilities in Epsom, Surrey, to see how they do it, to discover just what can go wrong with these chunks of hardware that we trust our businesses and precious family memories to, and to help us understand what we can all do to guard ourselves against future data loss.

What's in a hard disk?

Inside the case of a hard disk, platters – made of metal or glass – are coated in a thin layer of magnetic material. A read-write head floats tens of nanometers above the surface of the platter, flicking back and forth to read from the data tracks recorded on the platters as a series of ones and zeros.

These tracks are tightly packed – Seagate has drives that cram over 52GB into a square inch, though most commercially available disks store less.

If all this sounds precarious to you, you’d be right. If things can go wrong, they will go wrong - and that’s a lesson many of us have had to learn the hard way.

Up till now, there wasn’t an official solution. While there are many data recovery firms, those that speak Mac are rare, and though Kroll Ontrack has been working with Apple for years, the lack of a verified provider meant that people working for Apple or on its behalf couldn’t recommend Kroll Ontrack.

Now that the company is verified, having your hard disk repaired, which involves taking it out of your Mac, doesn’t invalidate your warranty.

The process of fixing a hard disk will be strangely familiar to anyone who’s watched medical dramas. The first step is like triage – getting a story from the customer to try to build up a picture of what has gone wrong, then working out what to do.

Later, technicians can try to match up this story with what they find with the drive itself. This description also helps the technicians figure out whether the problem lies with the physical disk mechanism itself or with the data.

Robert Winter, Kroll Ontrack’s chief engineer tells us that of the drives the company sees, 70% suffer from physical problems and 30% are so-called logical problems, everything from corrupt directories to accidentally reformatted drives.

The first priority is to get an image of the drive, by cloning its contents onto the company’s 100TB RAID systems. If the drive is physically damaged – worn components, physical trauma – it goes into the clean room.

This stage isn’t about ‘fixing’ the drive – it’s not worth risking your data to a patched-up drive that has already failed. "We just want to get it running long enough to make that image," Winter tells us.

Once the problem has been diagnosed, Kroll Ontrack will consult with the customer to see what can be done and how much it will cost.

"The average data recovery cost we see here is about £800," says Phil Bridge, Kroll Ontrack UK’s MD, "but that’s not to say we don’t have cheaper options; our photo recovery service, for example, costs £299."

Before visiting the clean room, we had visions of Spielbergian white rooms with decontamination chambers, but if fact all that is not really necessary. Each bench has a huge air filter above it, sure, but we could wander in without first donning an Outbreak-style suit.

Despite the incredible tolerances involved, hard disks, it turns out, could run for a couple of hours in a normal room even when the top casing is removed. In the sort of rarefied air of Kroll Ontrack’s clean room, that figure jumps to days, weeks and even months, allowing the technicians to piece together the data on the platters.

Once the data has been cloned, technicians can start recovering files. Even if the directory – the part that tells the computer where all the files are – has been damaged, it’s possible to do a signature search, looking for distinctive header information that tells the technicians where particular file types are.

After a successfully recovery – which typically happens in two or three days – the data is loaded onto a new portable disk and sent back to its owner.

The most common physical trauma that a hard disk can suffer from is what the technicians at Kroll Ontrack call a head slap, where the read/write heads are knocked onto the surface of the disk platters.

It can cause huge problems; since it’s only the surface of the disk that records the data, scraping this coating off means that the information in that section of the disk is probably lost, and if data vital to the operation of your drive or operating system is – or rather was – stored there, you’re in trouble.

What’s more, the dust from the scraped-off surface can further interfere with the hard disk’s operation, and in disks that have multiple platters to increase their capacities, this can be a serious problem.

There’s another horror to contend with. While most of the platters in desktop (3.5-inch) drives are metal, laptop drives (2.5-inch) usually have platters made from glass. Though it’s incredibly tough, it can shatter; both this and the head slap are normally caused by rough handling.

But though disks are finely-engineered things, they can withstand quite dramatic encounters. Though it makes their job that bit harder, data recovery specialist such as Kroll Ontrack can resurrect data from hard disks that have suffered from fire or flood.

Even if the hard disk itself is in good condition, however, there could be problems with the data it holds.

One of the most common reasons people send their disks to Kroll Ontrack is because they have reformatted a drive without realising that there’s essential information on there.

While it doesn’t have the facilities to resurrect data from a drive that has been zeroed out – had information rewritten over every sector – most people don’t do this when erasing hard disks, so Kroll Ontrack can simply ignore the missing directory that gets trashed during a standard format and examine the contents of the disk sector by sector.

Take care of your data