Images of the Nikon P6000 leaked 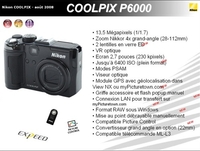 Nikon may have only announced a new camera just last week, the D700, but there are rumours bubbling up on the good ol' internet that the camera manufacturer is preparing a release of a new addition to its Coolpix range, the P6000.

If the speculation turns out to be true, the camera will house a whopping 13.5MP sensor - a whole 1MP bigger than its newly launched DSLR.

The picture of the camera leaked includes info that the camera may house and include: a Zoom Nikkor 4x grand-angle lens (28-112mm); GPS photo-tagging; and a LAN connection.

The rumour comes after the launch of a new Coolpix advert, which is the first ad by Nikon for five years. The star of the recent TV ad is Nikon's Coolpix S210, part of its lower-end 'style' range.

If the rumours of the high-end P6000 are true, the company will probably unveil the camera at this year's Photokina, which takes place in Cologne, Germany, in September.