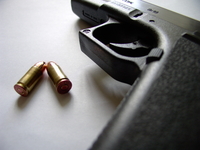 A fugitive spammer shot his wife and child dead yesterday, just four days after escaping from a minimum-security prison. According to reports, "Spam King" Eddie Davidson also wounded a teenage girl before turning the gun on himself.

Police responded to a report of gunfire in the town of Bennett, near Denver, USA, to find the bodies of Davidson, his 29-year-old wife and 3-year-old daughter lying near a Toyota Sequoia SUV, with a pistol near by. A 7-month-old boy was found unharmed in the SUV, said Arapahoe County Undersheriff Mark Campbell. The motives for the murders remain unclear.

Prolific spammer Davidson earned millions of dollars between 2003 and 2006 by running a spamming operation from his home.

Videos: round-up of the ridiculous

An impressive selection of bizarre videos surfaced on the web this week, ranging from the man base-jumping off a gigantic wind turbine to footage released by Avon and Somerset Police featuring audio from intoxicated people calling 999. The recordings truly showcase Bristol and Bath's finest; particularly noteworthy is the woman who simply must find out when the internet started. (She should have asked Al Gore, he did invent the internet after all.) And not to be forgotten, the remarkable CCTV recording of the guy hit by a car - while quietly eating his dinner inside an American diner.

In other news, classified launch code devices for US nuclear missiles became insecure earlier this month when three ballistic crew members fell asleep at their posts, it was reported today. Fortunately, an investigation by military and National Security Agency experts found that the missile launch codes were outdated and remained secure at all times.

Meanwhile, only hours after announcing the theft of his bicycle, Tory-leader David Cameron's stolen vehicle has apparently turned up on eBay. When questioned about the condition of the saddle, the anonymous seller reflects: "It seems the previous owner preferred to talk out of his back side rather than sit on it." He continues: "The bike is BIG and BLUE and despite looking quite well-balanced it leans oddly to the right". As we went to press, bidding for Cameron's "old friend" stood at £70.

And scientists in Wales have been braving the booze-fuelled streets of Cardiff after dark, studying drunken revelers as they stagger home, in a bid to build an accurate computer model of their movements. It's all part of a plan to help city planners design streets that are safer for the intoxicated.

But the developments have come too late for one Polish tourist, who died after being electrocuted when he urinated on a railway at a busy London station. According to Network Rail, in excess of 60 people die on railway lines every year, of which some 40 per cent are electrified.

Can't live without your iPhone? Thanks to a company named Creative Coffins, which lets you create any casket design you want, now you won't have to. If an iPhone-shaped coffin ain't your thing, how about a Vista, Halo 3 - hell, even a GTAIV-themed casket? The chaps over at T3 have mocked up a number of favourites they'd like to be buried in, perhaps one might take your fancy.