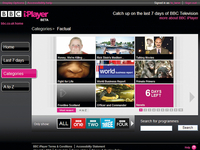 The television companies appear to have cottoned on the fact that the internet is not necessarily going to end their media dominance, with a CBS commissioned study discovering that full-length shows on the web will not kill television's audience.

A survey of an impressive 50,000 people conducted by Magid Media Labs polled people who had watched CBS programs online.

The findings make particularly interesting reading with the average age of online viewers an astounding 38, just under half of recipients (46%) saying that they only watch shows online and 35 per cent of people left more likely to watch CBS shows after finding their wares online.

The survey also provided some encouraging signs for advertisers with half of the respondents recalling the brand of an advert they saw whilst watching internet television and 18 per cent saying it would play a role in their decision to buy something.

British internet television is flourishing - with the BBC's iPlayer leading the way, a collaborative service called Kangaroo close to arrival and other key broadcasters, including Channel Five, ITV and Channel Four all seeing the potential of the web.