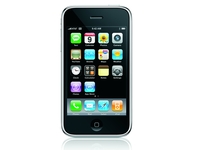 The pay as you go (PAYG) version of the iPhone 3G have begun to filter out of Europe, and aren’t too bad in smartphone terms.

The cost of the iPhone 3G on an unsubsidised basis would be comparable with such devices as the HTC Touch Diamond and a few of the BlackBerry range, which means it’s competing fairly well on cost (probably because Apple made the back out of plastic).

We contacted Carphone Warehouse and O2 to find out when this will be hitting the UK and how much the two units will cost, but the word is a decision is "still a few weeks away."