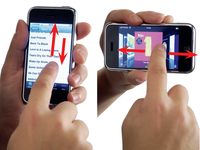 German Apple lovers will be feeling fairly chipper asT-Mobile has decided to get in on the subsidised iPhone 3G action.

The new iPhone will cost less than a pound in the move thatasks for only 69 Euros (£55) per month in return.

However, when compared with O2's £45 a month free iPhone 3Gpackage, it doesn't look as good.

The move to subsidise the handsets comes as very littleshock, as it once again highlights Apple's admission the earlierrevenue-sharing model it implemented with the exclusive operators was harming sales.

The company wants to sell 10 million devices by the end ofthe year, and will need to double its sale rate at least to achieve this.

However, dropping the device into 70 countries by the end of2008 will probably help Apple achieve its merry little quest.