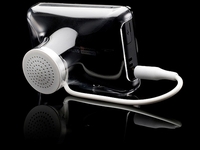 You know how it goes: designer is told to build a decent removable speaker onto a 2-inch PMP. He waves a hand dismissively at the request - he’s more interested in the World War II website he’s reading.

But just as he’s flicking across ‘gas-masks of the mid 1940s’ the PMP falls into his lap, and an invention of pure madness is born in the shape of the Lplayer (you see what they did there?).

Because if you were to take a PMP and stick breathing apparatus on the back to double as both a removable speaker and stand, this is how it would look.

But if there’s one thing Korean iRiver knows how to do, it’s making decent video and audio devices.

Sporting flavours from 2GB-8GB, the mini device also comes with an FM tuner, a microphone and uses iRiver’s D-Click system, which turns the display into a menu navigator.

It will also eat almost every kind of audio coding known to man, including MP3, OGG and WMA, as well as a whole host of video files. (Although AAC isn’t mentioned in the list intriguingly).

Available for £67, although only from Korea at the moment.