Is 3D TV the next big thing? 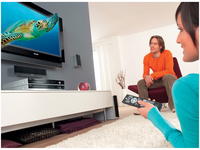 Pay a visit to Steven Spielberg's favourite cinema this summer and it won't be the latest blockbuster that catches your eye. Walk through the foyer at the Bridge Theater in Los Angeles and you'll be awe-struck at the sight of wall-mounted displays throwing out images in glorious 3D - and you won't need to wear googly glasses to see them.

The professional displays are the work of Philips 3D Solutions, which is currently rolling them out worldwide, appearing in airports, shopping malls, casinos and, of course, cinemas. The best thing is that the technology Philips uses is fairly straightforward, promising great things for the TVs we're used to having at home.

The Philips WOWvx (the wow-effect, plus Visual eXperience) uses a series of tiny lenticular lenses mounted in front of a regular high definition display. If lenticular sounds familiar then that's because it is - Philips WOWVx uses a similar technique to the animated 3D postcards you can find at tourist traps the world over. And you don't need to wear silly glasses to view those either.

Of course, having a lenticular lens in itself isn't enough - you also have to create a stereoscopic image to give the illusion of depth. Philips has two different formats for content creation - a standard version called 2D-plus-Depth, plus and an extended version it dubs Declipse (as in the opposite of eclipse).

2D-plus-Depth does exactly what it says on the tin. It takes a 2D image and then adds depth to give you a 3D representation. If a normal display has pixel information as 'x' and 'y' co-ordinates, then 2D-plus-Depth adds 'z' to describe how deep the image portrayed by that pixel should be.

The exciting thing for all of us, and for Hollywood, production studios and broadcasters, is that 2D-plus-Depth is backwards-compatible. Any movie, TV programme or music video you've ever watched can now be presented in 3D, adding a new whole dimension - literally - to your viewing experience.


Bjorn Teuwsen, marketing and communications manager at Philips 3D Solutions, says the depth information can be added in post-production using the company's own BlueBox video production suite, which creates the 2D-plus-Depth format, that you'll eventually see as a single 3D entity on a compatible display.

You can avoid this step, of course, by using a stereoscopic camera to automatically film the different angles you need. That's something broadcasters and film studios are doing increasingly. You only have to look to forthcoming features like Toys Story 3 and Ice Age - Dawn Of The Dinosaurs, both of which are due in cinemas in 2009.

Declipse takes our perception of depth one stage further. It effectively splits the picture up into separate background and foreground layers that enable you to add true depth to an image - Philips calls it the 'look around' view. And it can again be added to existing 2D material.

One of the obvious drawbacks when it comes to creating 3D images from 2D originals is one of occlusion, which is when one object is situated in front of another, obscuring your view of the whole scene. Bjorn Teuwsen cites the example of a girl standing in a field with a forest behind her.

Looking at the 2D image you obviously won't know what was behind the girl, making a 3D image difficult to create, so Declipse steps in, depicts the background layer, and creates the missing picture information using specially-created algorithms. It works in a stereoscopic image because you're not having to create all of the missing information - you're not showing a 360-degree view here.

It is, of course, easier if the 3D image has been created in full already, as is done with computer-generated images like animation, graphics and video games. In that case, Declipse simply takes the existing 3D data - via plugins for programs like Autodesk Maya and Ulead's 3D Studio Max - and uses that to show 3D on the display. Just imagine what your favourite video games would be like if you could really play them in three dimensions?

The obvious drawback with any of this right now is that you need content that's been specially created - either during the production process, or in post-production.

That obviously means you can't watch regular TV in 3D, no matter how much you like the idea of a three-dimensional Fiona Bruce sitting in your lounge, while reading the news.

However, Teuwsen does hold out some hope. Since creating 3D image from 2D is simply about data processing, it's only a matter of time before the technology can be packaged inside the video processors that make up ordinary TVs.

"It's just one way to stand out, Bjorn Teuwsen says, "from the 3,000 advertising messages we receive every day."

Stereoscopic images have been around for 150 years or so, but the first moving 3D images appeared in cinemas during the 1950s as a way for Hollywood studios to compete against the rising threat of television. Of course then, as now, displaying a 3D image has required viewers to wear glasses (either stereoscopic, or those with red and green lenses), which are not only inconvenient, but can be uncomfortable too.

Part of the reason for that is that 3D images can induce dizziness, or nausea. This is due to cone transitions - the crossing over of one part of a stereoscopic image designed for one eye appearing in the other, causing blurriness and eye-strain.

Teuwsen says Philips has largely been able to minimise effects this with its 3D displays to the extent that it's now barely noticeable. After all feelings of nausea are the last things advertisers want you to feel when faced with a 3D representation of their produce.