Is .Mac getting a name change? 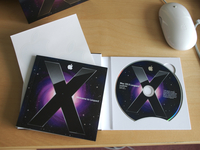 Apple’s subscription-based online service .Mac is getting a name change, if speculation is to be believed.

Dot Mac is the online tool-kit that works with your Mac OSX’s iLife package letting you share media over the internet and sync your contacts and calendars with multiple computers round your home.

Although Apple has not confirmed reports – our guess is Mr Jobs will announce it at the 9 June Worldwide Developers Conference (WWDC) – the programmers of the new OSX upgrade (10.5.3), which was released 28 May, have not hard-coded the .Mac name, opting for a placeholder instead.

The new title that’s being bandied around various blogs is ‘Mobile me’. It doesn’t take a Sherlock Holmes to figure out that, if this is true, the name change has something to do with the service's integration with ‘alleged’ upcoming new-and-improved iPhone.

Currently, the .Mac package costs £69 a year. This comes with 10GB of combined email and file storage, 100GB of monthly data transfer and up to five email aliases. There’s no word as of yet that this price will increase to include iPhone synchronisation.