Is there really such a thing as Wi-Fi allergy? 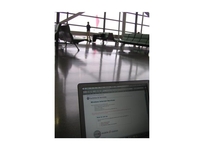 Here's a new one. A bunch of Santa Fe residents are challenging the city's seemingly laudable plan to introduce free city-wide Wi-Fi, after claiming to be suffering from a heightened sensitivity to electromagnetic radio frequency emissions.

Santa Fe's city council has responded to the irate citizens' claims that free Wi-Fi would discriminate against sufferers of 'Wi-Fi allergy' under the Americans with Disabilities Act (ADA), by simply rejecting the claims of Arthur Firstenberg, the leader of the group.

Firstenberg in turn calls the city council's decision a "disaster" and is already talking about legal action. City Attorney Frank Katz, has researched the matter and has sensibly concluded that any legal challenge from Firstenberg would be without merit.

As Ars Technica has detailed, there is "absolutely no evidence whatsoever" to support the claims of Wi-Fi allergies. "It has been noted that patients who present themselves to doctors with such symptoms often also suffer from psychiatric complaints," he concluded.