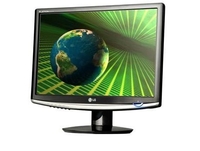 For most electronics manufacturers, garnering an eco-conscienceis the big thing at the moment, since the government and consumers alike havestarted to worry that our insatiable appetite for tech is damaging the environment.

Enter the FLATRON W2252TE. Despite having a name that couldeasily make it the robot in the Transformers franchise, the FLATRON is aneco-friendly display by LG that is reportedly 45 per cent less power hungrythan your average computer screen.

Speaking about the new ‘eco’ monitor, Fiona Landsberg,marketing manager, LG Electronics, said: "With the ever increasing time spentby consumers on computers these days, there is a need for products that aremore energy efficient.

"The W2252TE gives consumers the chance to work, play games,watch movies or surf the internet, safe in the knowledge that they are doing asmuch as possible to help reduce their impact on the environment.

"We are committed to expanding our ‘green’ monitor portfoliowith products that either equal or better the energy saving provided by the W2252TE."

This 22in monitor will be available as of August. Pricing is to be confirmed.