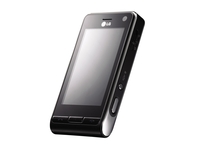 The rumour on the blogwires is LG is preparing to have another crack at the touchscreen phone market, and this time plans to whack an 8MP snapper on the back.

The KC910 would be out sometime in Q4, likely October, this year, as LG aims to consolidate its new found position as fourth biggest global handset manufacturer, having recently beaten Sony Ericsson in the rankings.

And now the KC910 would be a rival to the recently announced C905 from the Swedish-Japanese company, rubbing salt into the eroding profits wound.

An exciting possibility is a 'completely new' user interface, which might be what's needed after the clunkiness of the Viewty's (LG's most popular touchscreen phone so far) UI.

The video camera will capture at 30 fps, which is a darn sight slower than the traditional 120 fps LG has plugged into most of its camera phones; whether its absence is an admission that the fun feature just isn't worth the effort, we'll soon find out.

Other than that, all we can do is pray to the mobile gods that these manufacturers stop messing about with megapixels and start working on more important stuff, like better lenses and less power-hungry features to extend battery life.

8MP is surely the limit of what anyone could want, or even need, in a camera phone. But that just means the 64MP Sony Ericsson handset is likely to be just around the corner&hellip;