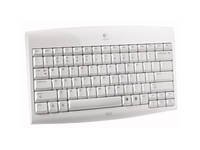 Logitech has chosen this year's E3 to announce the launch of two new wireless peripherals for your next-gen games consoles.

First up is the company's new keyboard. Called the Logitech Cordless Keyboard, this is, according to the press release, the "must-have accessory for chat-oriented games and the Wii Internet Channel."

It's not just any keyboard, either, as it is equipped with 'hot' keys that will Zoom In/Out, go Forward/Back, hit Quit and OK that will apparently make it easier to communicate with friends and surf the internet all through your Nintendo Wii.

To stay in-keeping with the Wii's style, Logitech has coloured its keyboard, wait for it, white.

Drive of your life

The wheel is said to be lag-free, due to its 2.4 GHz wireless technology and also contains an expandable lap rest so if you don't have to bother sticking the thing on a table.

Both the Logitech keyboard and racing wheel will be available from August. Price-wise, you're looking at £24.99 for the keyboard and around &euro;79.99 (£63) for the wheel.